Tokyo Disneyland is a 115-acre theme park at the Tokyo Disney Resort in Urayasu, Chiba Prefecture, Japan, near Tokyo. Its main gate is directly adjacent to both Maihama Station and Tokyo Disneyland Station. It was the first Disney park to be built outside the United States, and it opened on 15 April 1983. The park was constructed in the same style as Magic Kingdom in Florida and Disneyland in California.

The park has seven themed areas: the World Bazaar; the four traditional Disney lands: Adventureland, Westernland, Fantasyland and Tomorrowland; and two mini-lands: Critter Country and Mickey's Toontown. Many of these areas mirror those in the original Disneyland as they are based on American Disney films and fantasies. Fantasyland includes Peter Pan's Flight, Snow White's Scary Adventures, Dumbo the Flying Elephant, based on Disney films and characters. The park is noted for its extensive open spaces, to accommodate the large crowds that visit the park. In 2017, Tokyo Disneyland hosted 16.6 million visitors, making it the world's third-most visited theme park behind the Magic Kingdom at Walt Disney World Resort and Disneyland Park at the Disneyland Resort.

Contact 24 Limousine & one of our sales staff can help organize a professional, english speaking Chauffeur to pick you up in one of our many prestige vehicles. We also have 5 & 9 seater mini vans if you are traveling with a large party. 24 Limousine can make your Tokyo Disneyland experience even more enjoyable as you relax in one our cars after a long day on your feet. 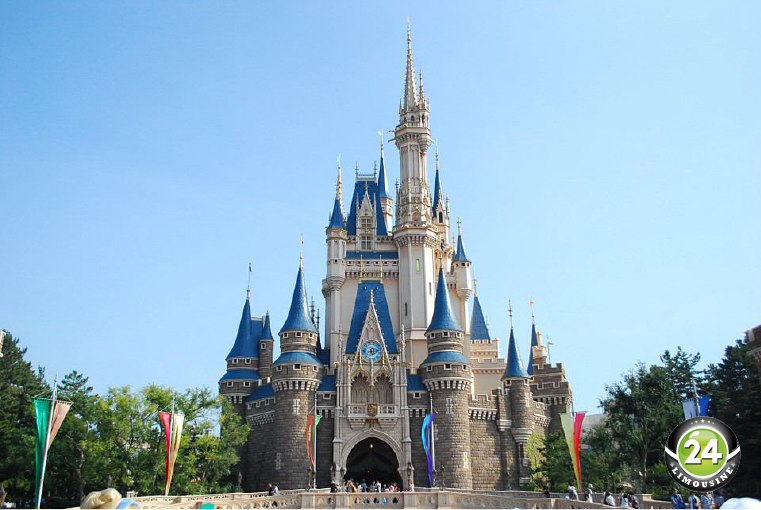